If you think back to the first time you picked up an iPod, chances are you knew how to use it almost instantly, even without looking at a manual. That’s the power of a transformational metaphor: an embedded design cue that lets users engage with a new product or service as if it were familiar. By taking advantage of people’s existing experiences, transformational metaphors leverage established concepts and interaction patterns to ease the transition to new behaviors.

In the 2001 press release introducing the iPod, Steve Jobs asserted that “...listening to music will never be the same again.” Except that, for anyone familiar with a portable transistor radio, the experience of using it was largely the same, again. Jonathan Ive, the designer most responsible for the groundbreaking device, never came out and said that he’d based its simple design and intuitive click-wheel on Dieter Rams’ 1958 Braun T3 transistor radio—but pretty much everyone else on the Internet did. The similarities are striking: clean lines, a minimal aesthetic, and most of all, a perfect circle for dialing in your music selection. 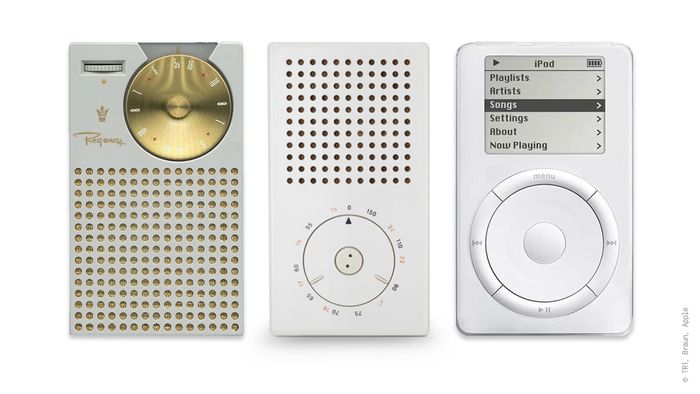 The iPod’s wheel, which also echoed controls on analog TVs and thermostats, allowed an entire generation of music lovers to adopt a new set of behaviors almost instantly. Apple often achieves its famously intuitive, user-friendly experiences by leaning heavily on this sort of metaphor—think of the Genius Bar you walk up to in an Apple Store, for another example.

Leveraging familiar interactions isn’t just a strategy for high-end consumer electronics. When Oregon-based Umpqua Bank approached Ziba to help them reimagine the banking experience, we used a similar, metaphor-based approach—less literal than the iPod’s, but just as effective.

Throughout the 1990s and 2000s, regional banks in the US were closing branches, moving their services online and becoming increasingly impersonal. But Umpqua saw an opportunity to head in the opposite direction, by embracing their local communities, and making banking a delight rather than a chore. Even with a wide range of digital options, research showed that customers increasingly wanted human interaction and a comfortable space when making important financial decisions. 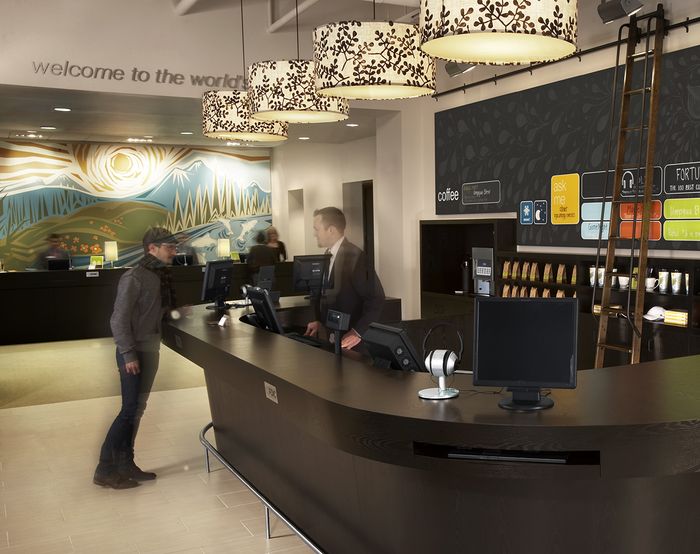 So the Ziba team drew on familiar environments where customers already feel relaxed and supported, like cafés, boutique hotels, and high-end retail spaces. Umpqua’s branches were reimagined as “stores”, with great coffee, free WiFi, and comfortable places to sit and browse financial products, which were arranged in physical displays, like luxury goods. Employees went through a Ritz-Carlton hotel training program, and offered chocolates to customers at the end of each transaction. To make the stores a seamless part of their communities, Umpqua designed them as multi-purpose spaces that transformed after closing time to host everything from exhibitions and yoga classes to music performances and movie nights.

Each of these decisions takes a desirable aspect of a familiar environment—café, hotel, boutique, community center—and translates it into a new context, allowing an unusual approach to banking to feel accessible. Customers had probably never seen another bank like Umpqua, but they felt instantly at ease. This service and environment design strategy was then scaled up to dozens of stores, driving a period of phenomenal growth that has made Umpqua the largest regional bank in the US, with 350 locations across five states.

One uncomfortable truth of innovation is that, done wrong, it can just as easily turn off customers as inspire them. But by casting the new in the form of the familiar, new behaviors don’t have to feel so daunting. In fact, with the right balance of innovation and metaphor, they can be positively delightful.